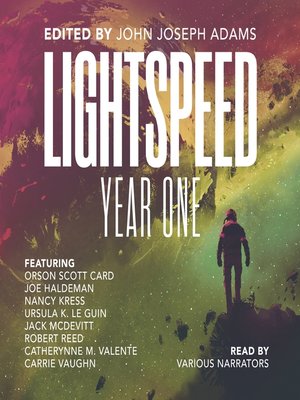 Lightspeed: Year One compiles fiction published by the online science fiction magazine Lightspeed in its first year. Produced by Skyboat Media, and under the direction of Grammy and Audie Award-winning narrator and producer Stefan Rudnicki, the Lightspeed podcast features audiobook-style recordings of the stories published each month in Lightspeed.

Joe Haldeman is an American author of award-winning science fiction and nonfiction works and a part-time professor at MIT. He earned a BS in physics and astronomy, as well as an MFA in writing. Drafted into the military, he served in Vietnam as a ...

John Joseph Adams is the bestselling editor of many anthologies, including Wastelands, The Living Dead, and The Way of the Wizard. A six-time Hugo finalist and five-time World Fantasy Award nominee, he is also the editor and publisher of the magaz...

John Joseph Adams is the bestselling editor of many anthologies, including Wastelands, The Living Dead, and The Way of the Wizard. A six-time Hugo finalist and five-time World Fantasy Award nominee, he is also the editor and publisher of the magaz...

Carol Emshwiller is the author of many acclaimed novels and story collections, including Carmen Dog, The Start of the End of It All (winner of the World Fantasy Award), Report to the Men's Club and Other Stories, I Live with You and You Dont' Know...

Jack McDevitt is an American science fiction author who won the 2006 Nebula Award for his novel Seeker. He has served as an officer in the US Navy, taught English and literature, and worked for the United States Customs Service. He lives with his ...

Carrie Vaughn had the nomadic childhood of the typical Air Force brat, with stops in California, Florida, North Dakota, Maryland, and Colorado. She is the author of the popular Kitty Norville series, and her short stories have appeared in numerous...

Yoon Ha Lee is a writer and mathematician whose work has appeared in...

Genevieve Valentine's first novel, Mechanique: A Tale of the Circus Tresaulti , won the 2012 Crawford Award and was nominated for the Nebula. Her short fiction has appeared in Clarkesworld, Strange Horizons, Journal of Mythic Arts, Lightspeed, and...

Catherynne M. Valente is an acclaimed author of fantasy and science fiction novels, short stories, and poetry. She has been nominated for the Hugo Award, Nebula Award, Locus Award, World Fantasy Award, and the James Tiptree Jr. Award. She made her...

Lightspeed
Copy and paste the code into your website.
New here? Learn how to read digital books for free