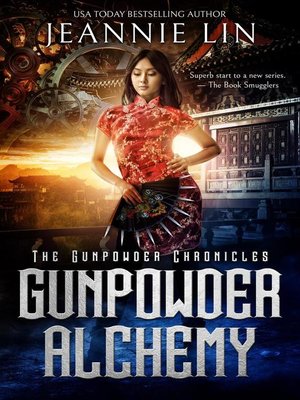 Book 1 of the The Gunpowder Chronicles, an Opium War steampunk series
In 1842, the gunpowder might of China's Qing Dynasty fell to Britain's steam engines. Furious, the Emperor ordered the death of his engineers, eliminating China's best chance of fighting back.
Since her father's execution eight years ago, Jin Soling has kept her family from falling apart. With her mother addicted to opium and her younger brother in danger of being sent off to the factories, Soling has no choice but to sell off the last of her father's possessions. Unwittingly, her actions bring her to the attention of the imperial court—the same court that betrayed her father.
The Crown Prince has launched a secret mission to bring together the remnants of the former Ministry of Science. To restore her family's name, Soling must track down the rebel alchemist who holds the key to powering the imperial fleet. Her only ally is a man she's just met—the engineer with a mysterious past who was once meant to be her husband...
First published in 2014 by InterMix Books.