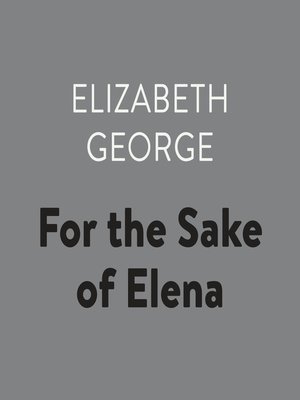 For the Sake of Elena

FictionMysterySuspenseThriller
Elena Weaver was a surprise to anyone meeting her for the first time. In her clingy dresses and dangling earrings she exuded a sexuality at odds with the innocence projected by the unicorn posters on her walls. While her embittered mother fretted about her welfare from her home in London, in Cambridge—where Elena was a student at St. Stephen's College—her father and his second wife each had their own very different image of the girl. As for Elena, she lived a life of casual and intense physical and emotional relationships, with scores to settle and goals to achieve—until someone, lying in wait along the route she ran every morning, bludgeoned her to death.
Unwilling to turn the killing over to the local police, the university calls in New Scotland Yard. Thus, Detective Inspector Thomas Lynley and his partner, Detective Sergeant Barbara Havers, enter the rarefied world of Cambridge University, where academic gowns often hide murderous intentions.
For both officers, the true identity of Elena Weaver proves elusive. Each relationship the girl left behind casts new light both on Elena and on those people who appeared to know her best—from an unsavory Swedish-born Shakespearean professor to the brooding head of the Deaf Students Union.
What's more, Elena's father, a Cambridge professor under consideration for a prestigious post, is a man with his own dark secrets. While his past sins make him neurotically dedicated to Elena and blind to her blacker side, present demons drive him toward betrayal.
FictionMysterySuspenseThriller

Elizabeth George is the New York Times bestselling author of twenty psychological suspense novels, four young adult novels, one book of nonfiction, and two short-story collections. Her work has been honored with the Anthony and Agatha awards, two ...

More about Elizabeth George
For the Sake of Elena
Copy and paste the code into your website.
New here? Learn how to read digital books for free