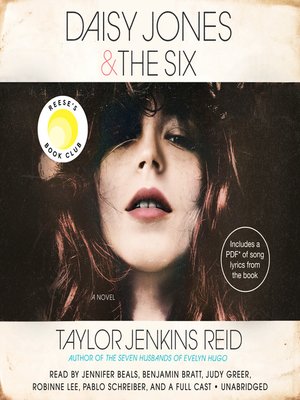 FictionLiterature
A gripping novel about the whirlwind rise of an iconic 1970s rock group and their beautiful lead singer, revealing the mystery behind their infamous breakup.
"I devoured Daisy Jones & The Six in a day, falling head over heels for it. Daisy and the band captured my heart."—Reese Witherspoon (Reese's Book Club x Hello Sunshine book pick)

Everyone knows DAISY JONES & THE SIX, but nobody knows the reason behind their split at the absolute height of their popularity . . . until now.
Daisy is a girl coming of age in L.A. in the late sixties, sneaking into clubs on the Sunset Strip, sleeping with rock stars, and dreaming of singing at the Whisky a Go Go. The sex and drugs are thrilling, but it's the rock 'n' roll she loves most. By the time she's twenty, her voice is getting noticed, and she has the kind of heedless beauty that makes people do crazy things.
Also getting noticed is The Six, a band led by the brooding Billy Dunne. On the eve of their first tour, his girlfriend Camila finds out she's pregnant, and with the pressure of impending fatherhood and fame, Billy goes a little wild on the road.
Daisy and Billy cross paths when a producer realizes that the key to supercharged success is to put the two together. What happens next will become the stuff of legend.
The making of that legend is chronicled in this riveting and unforgettable novel, written as an oral history of one of the biggest bands of the seventies. Taylor Jenkins Reid is a talented writer who takes her work to a new level with Daisy Jones & The Six, brilliantly capturing a place and time in an utterly distinctive voice.
Includes a PDF of song lyrics from the book
Cast List:
Daisy Jones, read by Jennifer Beals
Billy Dunne, read by Pablo Schreiber
Graham Dunne, read by Benjamin Bratt
Eddie Loving, read by Fred Berman
Warren Rhodes, read by Ari Fliakos
Karen Karen, read by Judy Greer
Camila Dunne, read by January LaVoy
Simone Jackson, read by Robinne Lee
Narrator / Author, read by Julia Whelan
Jim Blades, read by Jonathan Davis
Rod Reyes, read by Henry Leyva
Artie Snyder, read by Oliver Wyman
Elaine Chang, read by Nancy Wu
Freddie Mendoza, read by P.J. Ochlan
Nick Harris, read by Arthur Bishop
Jonah Berg, read by Holter Graham
Greg McGuinness, read by Brendan Wayne
Pete Loving, read by Pete Larkin
Wyatt Stone, read by Alex Jenkins Reid
Hank Allen, read by Robert Petkoff
Opal Cunningham, read by Sara Arrington
Praise for Daisy Jones & The Six
"Daisy Jones & The Six is just plain fun from cover to cover. . . . Her characters feel so vividly real, you'll wish you could stream their albums, YouTube their concerts, and google their wildest moments to see them for yourself."—HelloGiggles
"Reid's wit and gift for telling a perfectly paced story make this one of the most enjoyably readable books of the year."—Nylon
"Reid delivers a stunning story of sex, drugs, and rock 'n' roll in the 1960s and '70s in this expertly wrought novel. Mimicking the style and substance of a tell-all celebrity memoir . . . Reid creates both story line and character gold. The book's prose is propulsive, original, and often raw."—Publishers Weekly (starred review)
FictionLiterature

TAYLOR JENKINS REID the author of The Seven Husbands of Evelyn Hugo, One True Loves, Maybe in Another Life, After I Do, and Forever, Interrupted. She lives in Los Angeles with her husband, their daughter, and their dog.

Daisy Jones & the Six
Copy and paste the code into your website.
New here? Learn how to read digital books for free