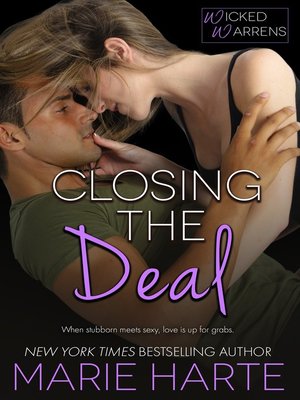 FictionRomance
The second stand-alone romance in the bestselling Wicked Warrens contemporary series from New York Times bestseller Marie Harte.
When stubborn meets sexy, love is up for grabs...but one of them is playing for keeps.
Derrick Warren has lusted after Sydney Fields ever since he first spotted her. All he has to do is let the old Warren magic do its thing...until an ex with an axe to grind shows up.
Before he knows it, the perfect date ends with Sydney's wine in his lap. Now she's not taking his calls. To his utter shock, he realizes he's going to have to work to win her over.
Thanks to her mother's bad example, Sydney is determined to never need a man. To her surprise, he not only satisfies her deepest desires, she finds herself craving his company. But when she realizes they're making love, not just having sex, her old instincts kick in. And that, more than anything else, scares the hell out of her...

This book has been previously published.
Warning: Look out for a stubborn redhead who's not afraid to throw her wine, her opinion, or her body at the annoyingly sexy architect determined to keep her for his own.
"Closing the Deal is as hot and sexy as the 1st book in the series. With laugh out loud moments and great characters, this is another fabulous read from Marie....."Tracy, Goodreads
FictionRomance

More about Marie Harte
Closing the Deal
Copy and paste the code into your website.
New here? Learn how to read digital books for free