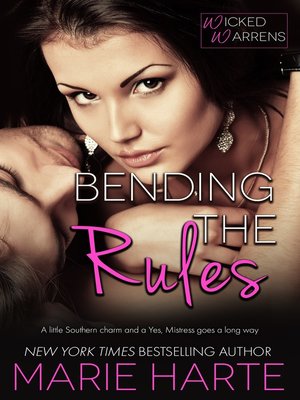 FictionRomance
The fifth and final stand-alone romance in the bestselling Wicked Warrens contemporary series from New York Times bestseller Marie Harte.
A little southern charm, and a Yes, Mistress, goes a long way.
Rex Samson is at the top of his game. His business is booming, his family loves him, and there's not a woman—or man—he can't charm. Until he meets Natalie Wielder, a tough-as-nails city planner who doesn't fall at his feet.
Nat has better things to do than play with the mayor's golden boy, but to her shock, she thoroughly enjoys herself at a social function with Rex...and breaks rule number one—No dating the enemy.
When playtime at the local club gets wild, Nat's secrets are exposed, and her policy on not mixing business and pleasure—rule number two—has gone by the wayside. What else can she do but say yes when Rex has no problem letting her take the lead in bed?
Before long, she knows she can't live without him. But Rex's kinky proclivities mirror hers—neither of which are good for her career. Loving him might mean losing what she's worked so hard to attain. Soon she'll have to figure out what's important in life. Her rules or love?
Primarily a m/f romance, with elements of m/m and m/m/f pairing included for your enjoyment.
This book has been previously published.
Warning: Contains a successful, carefree hedonist who wants to be dominated, and a sexy, career-minded vixen who is more than willing to oblige. Not one drop of vanilla in sight. Enjoy!
"I've been reading Marie Harte's Wicked Warrens series since its inception and I've enjoyed them all, but some have stood out more than others and Bending The Rules is right at the top of the heap with Enjoying The Show." 5 StarsSlick, Guilty Pleasures Book Reviews
FictionRomance

More about Marie Harte
Bending the Rules
Copy and paste the code into your website.
New here? Learn how to read digital books for free