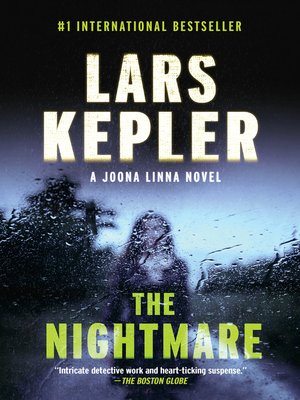 FictionMysteryThriller
Following on the heels of the bestselling series opener The Hypnotist, Kepler delivers another nail-biting, hair-raising thriller—pulled straight from your darkest nightmares.
A young woman's body is found on a pleasure boat drifting down the Stockholm archipelago. Her lungs are filled with brackish water, but how are her clothes dry? Then a man's body is found hanging from a lamp hook in his apartment—but how could he have hanged himself with no furniture to climb on? As Detective Inspector Joona Linna begins to piece together the two mysteries, what he finds will be a mere prelude to a dizzying and dangerous course of events.
From the internationally bestselling author of The Hypnotist, The Nightmare is another spellbinding tale of Nordic crime, as the dark psychology of characters reveal how blind we can be to our own motives.
FictionMysteryThriller

More about Lars Kepler
The Nightmare
Copy and paste the code into your website.
New here? Learn how to read digital books for free