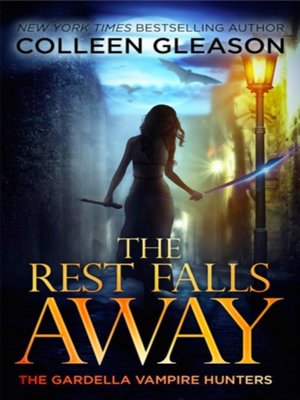 The Rest Falls Away

Beneath the glitter of dazzling nineteenth century London Society lurks a bloodthirsty evil...Vampires have always lived among them, quietly attacking unsuspecting debutantes and dandified lords as well as hackney drivers and Bond Street milliners. If not for the vampire slayers of the Gardella family, these immortal creatures would have long ago taken control of the world. In every generation, a Gardella is called to accept the family legacy, and this time, Victoria Gardella Grantworth is chosen, on the eve of her debut, to carry the stake. But as she moves between the crush of ballrooms and dangerous moonlit streets, Victoria's heart is torn between London's most eligible bachelor, the Marquess of Rockley, and her dark, dangerous duty. And when she comes face-to-face with the most powerful vampire in history, Victoria must ultimately make a choice between duty and love. This is a five-book series about Victoria Gardella, Vampire Hunter. The series should be read in order to avoid spoilers. The series is: The Rest Falls Away Rises the Night The Bleeding Dusk When Twilight Burns As Shadows Fade All five books are now available.

The Rest Falls Away
Copy and paste the code into your website.
New here? Learn how to read digital books for free