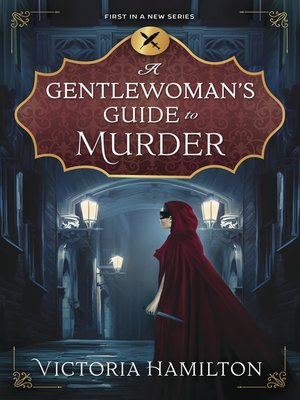 A Gentlewoman's Guide to Murder

"[An] outstanding series launch. ... Hamilton expertly balances the page-turning detection with the story of a hypocritical society where women, whether they are scullery maids or orphans, rarely get to make their own decisions."—Publishers Weekly (starred review)

The shocking murder of Sir Henry Claybourne leaves Regency London shaken and horror-struck. But for genteel spinster Miss Emmeline St. Germaine, the crime slices far too close to home. Just hours before the knight's death she held a dagger to him, threatening him to stay silent as she rescued a scullery maid he had procured for his pleasure.

Did the man—or woman—who murdered the knight know of her visit? Her secret identity at risk, her reputation and life in jeopardy, Emmeline must solve the crime or face scandalous exposure and ruination, or worse—the hangman's noose—for a crime she did not commit.

"Hamilton's novel will appeal to fans of Anne Perry's Charlotte and Pitt mysteries."—Booklist

Victoria Hamilton is the nationally bestselling author of the Vintage Kitchen Mysteries, the Merry Muffin Mysteries, and the Teapot Collector Mysteries. In addition to her mysteries, she has written twenty regency romance novels as Amanda Cooper a...

More about Victoria Hamilton
A Gentlewoman's Guide to Murder
Copy and paste the code into your website.
New here? Learn how to read digital books for free