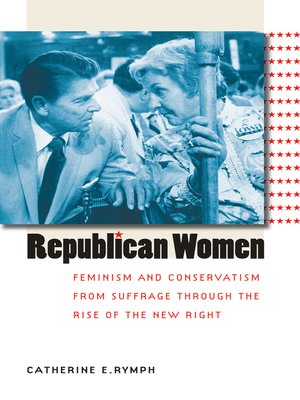 View more libraries...
In the wake of the Nineteenth Amendment, Republican women set out to forge a place for themselves within the Grand Old Party. As Catherine Rymph explains, their often conflicting efforts over the subsequent decades would leave a mark on both conservative politics and American feminism.
Part of an emerging body of work on women's participation in partisan politics, Republican Women explores the dilemmas confronting progressive, conservative, and moderate Republican women as they sought to achieve a voice for themselves within the GOP. Rymph first examines women's grassroots organizing for the party in the decades following the initiation of women's suffrage. She then traces Marion Martin's efforts from 1938 to 1946 to shape the National Federation of Women's Republican Clubs, the party's increasing dependence on the work of women at the grassroots in the postwar years, and the eventual mobilization of many of these women behind Barry Goldwater, in defiance of party leaders.
From the flux of the party's post-Goldwater years emerged two groups of women on a collision course: a group of party insiders calling themselves feminists challenged supporters of independent Republican Phyllis Schlafly's growing movement opposing the Equal Rights Amendment. Their battles over the meanings of gender, power, and Republicanism continued earlier struggles even as they helped shape the party's fundamental transformation in the Reagan years.