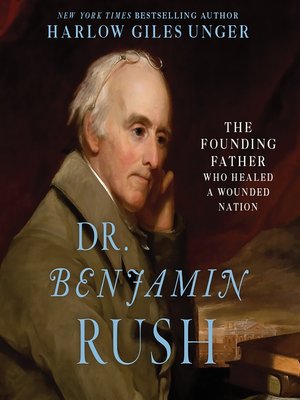 The Founding Father Who Healed a Wounded Nation

Dr. Benjamin Rush was the Founding Father of an America that other Founding Fathers forgot or ignored-an America of women, African-Americans, Jews, Quakers, Roman Catholics, indentured workers, and the poor. Ninety percent of the people lived in that other America, but none could vote and none had rights to life, liberty, or the pursuit of happiness, either before or after independence from Britain. Alone among the Founding Fathers who signed the Declaration of Independence, Benjamin Rush heard their cries and stepped forth as the nation's first great humanitarian and social reformer.

Known primarily as America's most influential and leading physician, Rush was also among the first to call for the abolition of slavery, equal rights for women, free education and health care for the poor, slum clearance, city-wide sanitation facilities, an end to child labor, universal public education, humane treatment and therapy for the insane, prison reform, an end to capital punishment, and improved medical care for injured troops.

Harlow Giles Unger, a former distinguished visiting fellow in American history at George Washington's Mount Vernon, is a veteran journalist, broadcaster, educator, and historian. He is the author of more than twenty books, including several biogra...

More about Harlow Giles Unger
Dr. Benjamin Rush
Copy and paste the code into your website.
New here? Learn how to read digital books for free