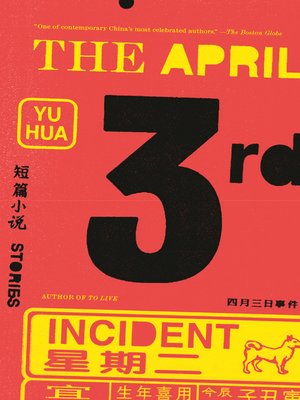 View more libraries...
From one of China's most famous contemporary writers, who celebrated novel To Live catapulted him to international fame, here is a stunning collection of stories, selected from the best of Yu Hua's early work, that shows his far-reaching influence on a pivotal period in Chinese literature.

In the late 1980s and early 1990s, Yu Hua and other young Chinese writers began to reimagine their national literature. Departing from conventional realism in favor of a more surreal and subjective approach inspired by Kafka, Faulkner, and Borges, the boundary-pushing fiction of this period reflected the momentous cultural changes sweeping the world's most populous nation.

The stories collected here show Yu Hua masterfully guiding us from one fractured reality to another. "A History of Two People" traces the paths of a man and a woman who dream in parallel throughout their lives. "In Memory of Miss Willow Yang" weaves a spellbinding web of signs and symbols. "As the North Wind Howled" carries a case of mistaken identity to absurd and hilarious conclusions. And the title story follows an unforgettable narrator determined to unearth a conspiracy against him that may not exist. By turns daring, darkly comic, thought-provoking, and profound, The April 3rd Incident is an extraordinary record of a singular moment in Chinese letters.