The Mystery of "A Yellow Sleuth" 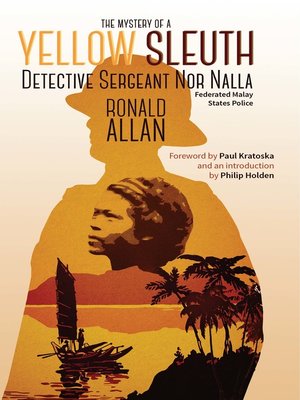 In 1931 a book appeared in London with the title A Yellow Sleuth: Being the Autobiography of "Nor Nalla" (Detective-Sergeant Federated Malay States Police). It was met with puzzled enthusiasm, The Straits Times commenting that the book "presents an interesting problem of distinguishing fact from fiction". The author claimed to be of mixed Malay and Sakai descent, fluent in many of the languages spoken in Southeast Asia, and able to pass as Malay, Sakai, Chinese, Javanese or Burmese. He began by stating that "this story will honestly recount the part I have played in the detection of crime", but added that he had changed personal and place names, and used a pseudonym because it would "be foolish of me to advertise my identity". He concluded, engagingly enough, "So there you have it! A true history! And, for a start you learn that it is largely untrue."

The name Nor Nalla is an anagram, and the author has been identified as Ronald (Ron) Allan, who worked on a rubber plantation in Malaya shortly before World War I. But many questions about his authorship remain.

Nor Nalla is an "impossible fantasy of hybridity" in the words of Philip Holden's introduction. Like Kipling's famous colonial spy, Kim, the yellow sleuth is a master of the undercover operation, from the forests of Malaya, to the ports of Java, in London's Chinatown and with Chinese labourers in WWI Flanders. Contemporary readers will enjoy the book's stories of detection and adventure, but they can also savour the way the author and his narrator navigate and reveal the contradictions of late colonial society.