A Rock between Two Rivers

ebook ∣ The Fracturing of a Texas Family Ranch 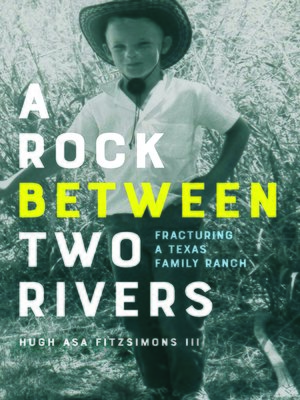 A Rock Between Two Rivers: Fracturing of a Texas Family Ranch is the telling of how a third-generation rancher comes to terms with the environmental legacy of his family's land for the generations who follow. Decades of wresting profit and product through agriculture, cattle ranching, oil drilling—never mind the extinction of the buffalo—has taken its toll on the land and its water supply. And with the widespread adoption of hydraulic fracking, already on pace to surpass this damage, Hugh Fitzsimons is on a mission to expose its local ecological hazards. Fitzsimons grapples with his role in this equally toxic space, and more broadly with his place in this beautiful but terse landscape, trying to make sense of the more complicated story of how his family continually changed the land inherited from his grandfather, and deeper still, how the land irrevocably changed the family.
In Between Two Rivers, Fitzsimons struggles with the inheritance he wants for his own children, one that considers the future.
Interweaving a family narrative of a life built on the U.S.-Mexico border and the ugly history of European colonization with its brutal consequences on the land and indigenous peoples, Fitzsimons explores how our attitudes toward this precious resource have changed alongside our relationship to the places we call home. And while this reckoning doesn't look away the harsh realities, Fitzsimons determinedly keeps his gaze focused on the future and finds his redemption on this same land in its past and promise.