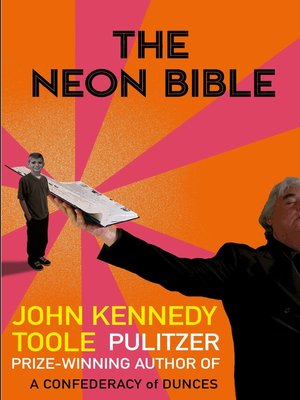 The accomplished and evocative first novel by the Pulitzer Prize-winning author of A Confederacy of Dunces.

John Kennedy Toole wrote The Neon Bible for a literary contest at the age of sixteen. The manuscript was finally published twenty years after Toole's death.

The Neon Bible opens with a young man named David, on a train, leaving the small Southern town he's grown up in for the first time. What unspools is the tender and tragic coming-of-age story of a lonely child, a story that revolves around David's unorthodox friendship with his great-aunt Mae - a former stage performer who is fiercely at odds with the conservative townspeople - and the everyday toll of living in an environment of religious fanaticism.

From the opening lines of The Neon Bible, David is fully alive, naive yet sharply observant, drawing us into his world through the sure artistry of John Kennedy Toole.

John Kennedy Toole's tender, nostalgic side is as brilliantly effective as his corrosive satire. If you liked To Kill A Mockingbird you will love The Neon Bible. - Florence King