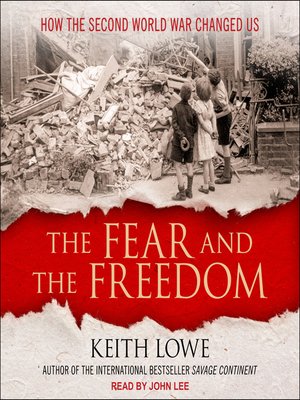 The Fear and the Freedom

How the Second World War Changed Us

HistoryMilitaryNonfiction
The Fear and the Freedom is Keith Lowe's follow-up to Savage Continent. While that book painted a picture of Europe in all its horror as World War II was ending, The Fear and the Freedom looks at all that has happened since, focusing on the changes that were brought about because of World War II-simultaneously one of the most catastrophic and most innovative events in history. It killed millions and eradicated empires, while at the same time creating the idea of human rights and giving birth to the UN. It was because of the war that penicillin was first mass-produced, computers were developed, and rockets first sent to the edge of space. The war created new philosophies, new ways of living, new architecture: this was the era of Le Corbusier, Simone de Beauvoir, and Chairman Mao. But amidst the waves of revolution and idealism there were also fears of globalization, a dread of the atom bomb, and an unexpressed longing for a past forever gone. All of these things and more came about as direct consequences of the war and continue to affect the world that we live in today.
HistoryMilitaryNonfiction

Keith Lowe is the author of the critically acclaimed Inferno: The Devastation of Hamburg, 1943, and Savage Continent, an international bestseller and the winner of both the Hessell-Tiltman Prize for History and Italy's prestigious Cherasco History...

More about Keith Lowe
The Fear and the Freedom
Copy and paste the code into your website.
New here? Learn how to read digital books for free