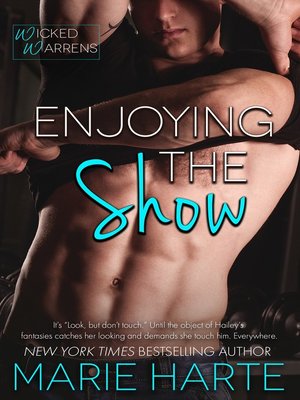 FictionRomance
The first stand-alone romance in the bestselling Wicked Warrens contemporary series from New York Times bestseller Marie Harte.
It's "Look, but don't touch." Until the object of Hailey's fantasies catches her looking and demands she touch him. Everywhere.
Hailey Jennison is smart, funny and, unfortunately, stacked like a blonde brick house. She's well aware of the impact her looks have on the male gender, and she hates it. Socially awkward, she keeps to a safe, boring routine, meeting friends once a week for dinner, some laughs, and entertainment.
Entertainment comes in the form of a little harmless voyeurism, watching the living, breathing sex god across the quad parade around his apartment half-naked. Hailey watches and yearns, indulging in this weekly fantasy that almost—but not quite—satisfies her every desire.
When Gage catches Hailey in the act of ogling him, he gives her a choice—go out with him, or he'll call the cops. But he has no intention of calling the law down on every man's fantasy. For he's been watching her, as well. And he has plans to fulfill her every desire.
This title has been previously published.
Warning: this title contains the following: girls' night, harmless peeping, and a man named "Mr. Tool."
"Marie Harte's Enjoying the Show is a deliciously steamy and fun novella with a surprising amount of depth."Book Reviews & More by Kathy
FictionRomance

More about Marie Harte
Enjoying the Show
Copy and paste the code into your website.
New here? Learn how to read digital books for free