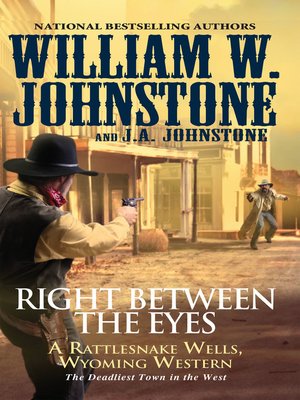 Right between the Eyes

A lawman with a past. A gunman with a grudge. A blood-soaked massacre just waiting to happen. Welcome back to Rattlesnake Wells, Wyoming . . .

In a wild frontier boomtown like Rattlesnake Wells, it's hard to know who to lock up, who to let out, and who to gun down. But as town marshal, it's Bob Hatfield's job to separate the sinners from the saints—or at least keep them from killing each other. Now there's a new boy in town. He's fresh out of prison. He swears he was wrongfully convicted of embezzling from his boss at the local mine. He wants to clear his name and reclaim the woman he loves. Hatfield wants to give the boy the benefit of the doubt. But when all hell starts to break loose—escalating from vicious saloon fights to violent shootouts—Bob knows there's more to the story than a little bad blood between townsfolk . . .

Someone is gunning for him. Somewhere in Rattlesnake Wells, an enemy from Hatfield's past is waiting to make his move. And sometimes, there's only one way to deliver justice: right between the eyes . . .
FictionWesternThrillerHistorical Fiction

More about William W. Johnstone
Right between the Eyes
Copy and paste the code into your website.
New here? Learn how to read digital books for free