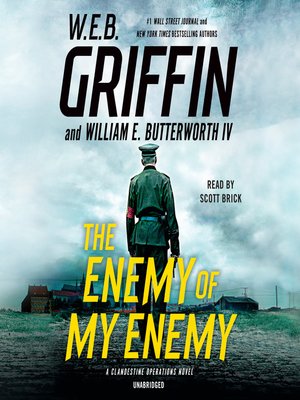 The Enemy of My Enemy

FictionLiteratureSuspenseThriller
Special agent James Cronley Jr. finds that fighting both ex-Nazis and the Soviet NKGB can lead to strange bedfellows, in the dramatic new Clandestine Operations novel about the birth of the CIA and the Cold War.
A month ago, Cronley managed to capture two notorious Nazi war criminals, but not without leaving some dead bodies and outraged Austrian police in his wake. He's been lying low ever since, but that little vacation is about to end. Somebody—Odessa, the NKGB, the Hungarian Secret Police?—has broken the criminals out of jail, and he must track them down again.
But there's more to it than that. Evidence has surfaced that in the war's last gasps, Heinrich Himmler had stashed away a fortune to build a secret religion, dedicated both to Himmler and to creating the Fourth Reich. That money is still out there in the hands of Odessa, and that infamous organization seems to have acquired a surprising—and troubling—ally.
Cronley is fast finding out that the phrase "the enemy of my enemy is my friend" can mean a lot of different things, and that it is not always clear which people he can trust and which are out to kill him.
FictionLiteratureSuspenseThriller

More about W.E.B. Griffin
The Enemy of My Enemy
Copy and paste the code into your website.
New here? Learn how to read digital books for free