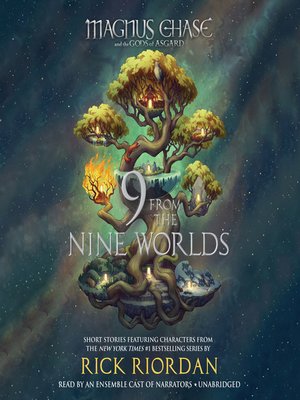 9 From the Nine Worlds

Magnus Chase and the Gods of Asgard

FantasyJuvenile FictionJuvenile LiteratureShort Stories
Beloved characters from the Magnus Chase and the Gods of Asgard series star in these hilarious and imaginative new short stories, each set in a different one of the Nine Worlds from Norse mythology.
The Magnus Chase and the Gods of Asgard trilogy may have concluded, but we haven't heard the last of our favorite peeps from the Nine Worlds. Join Hearthstone, Blitzen, Samirah, Alex, Jack, T.J., Mallory, Halfborn, and more on a hilarious and unforgettable journey through Rick Riordan's unique take on Norse mythology. While Magnus is off visiting his cousin, Annabeth, his friends find themselves in some sticky, hairy, and smelly situations as they try to outwit moronic giants, murderous creatures, and meddlesome gods. Can they stave off Ragnarok at least until Magnus gets back?
FantasyJuvenile FictionJuvenile LiteratureShort Stories

RICK RIORDAN, dubbed "storyteller of the gods" by Publishers Weekly, is the author of five #1 New York Times best-selling middle grade series with millions of copies sold throughout the world: Percy Jackson and the Olympians, The Heroes of Olympus...

More about Rick Riordan
9 From the Nine Worlds
Copy and paste the code into your website.
New here? Learn how to read digital books for free