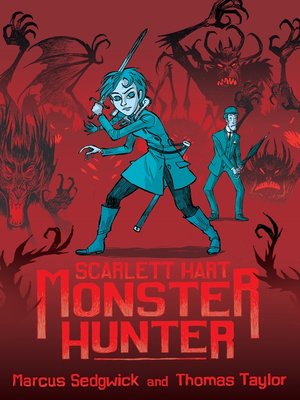 Scarlett Hart, orphaned daughter of two legendary monster hunters, is determined to carry on in her parents' footsteps—even if the Royal Academy for the Pursuit and Eradication of Zoological Eccentricities says she's too young to fight perilous horrors. But whether it's creepy mummies or a horrid hound, Scarlett won't back down, and with the help of her loyal butler and a lot of monster-mashing gadgets, she's on the case.

With her parent's archrival, Count Stankovic, ratting her out to T.R.A.P.E.Z.E. and taking all the monster-catching rewards for himself, it's getting hard for Scarlett to do what she was born to do. And when more monsters start mysteriously manifesting than ever before, Scarlett knows she has to get to the bottom of it and save the city . . . whatever the danger!

In his first adventure for middle-grade readers, acclaimed YA author Marcus Sedgwick teams up with Thomas Taylor (illustrator of the original edition of Harry Potter and the Philosopher's Stone) to create a rip-roaring romp full of hairy horrors, villainous villains, and introducing the world's toughest monster hunter—Scarlett Hart!