Murder in the Oval Library 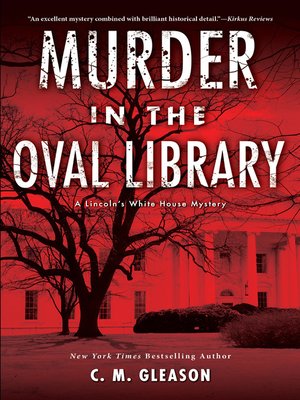 View more libraries...
In 1861, rebel troops are within striking distance of the president—but a murderer is even closer: "An excellent mystery . . . Brilliant historical detail" (Kirkus Reviews).

As the Civil War begins, an invasion of Washington, DC, seems imminent. Lincoln's trusted aide, Adam Speed Quinn, and Quinn's old friend, Sen. Jim Lane, hastily assemble a motley crew of just over a hundred men and garrison them in the East Room of the White House. But even as dawn breaks, a single act of violence intrudes. One of the Frontier Guard lies dead in the oval library, throat slit ear to ear. A murderer is among them.

Lincoln promptly assigns Quinn to deal with the matter, and he in turn is aided by journalist Sophie Gates and Dr. George Hilton. And to Quinn's chagrin, the Southern belle Constance Lemagne insists on being involved in the investigation as well. But when Dr. Hilton examines the body, he makes a startling discovery that overturns all Quinn's assumptions about the murder. With his president at grave risk from without and within, Quinn must act quickly to catch the White House killer in this historical mystery from a New York Times–bestselling author whose work has been praised as "delightfully entertaining" (Chicago Tribune).