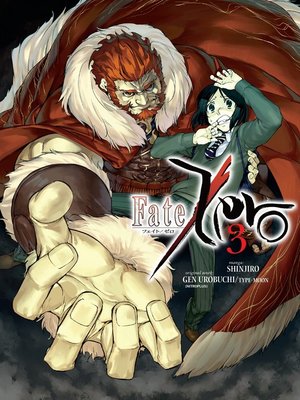 View more libraries...
Gen Urobuchi and Shinjiro's manga adaptation of Type-Moon's hit anime and novel series continues! With the fourth Holy Grail War underway, seven magi and their summoned heroes from history being to meet and battle to the death to claim the grail and have their wishes granted! Contestants Rider and Waver join a shipyard conflict, making a dramatic entrance and adding to the destruction already caused. The strange servant named Caster and his master bond over a shared predilection for torture, and Kariya's horrific origins are revealed.

Praise for the original Fate/Zero manga:
"It has dynamic, multifaceted characters, explores great philosophies and themes, and tops it off with large helpings of action. It also has the will to go deep into dark, psychological territory to improve both its characters and story." -Kotaku

"As both a standalone project and a prequel, the series is an unqualified success." -Anime News Network

"The time and effort that Urobuchi puts into the majority of the characters. Motivations are explored and contrasted, relationships grow and are expanded upon and all this gives the superb action context and meaning."
-T.H.E.M. Anime Reviews