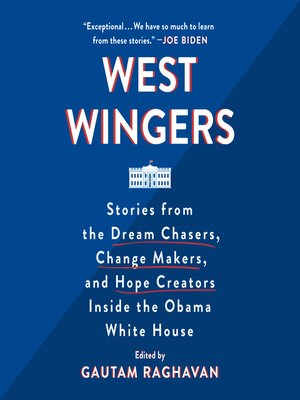 Stories from the Dream Chasers, Change Makers, and Hope Creators Inside the Obama White House

Biography & AutobiographyHistoryPoliticsNonfiction
The Obama White House staff invites us behind-the-scenes of history for a deeply personal and moving look at the presidency and how a president's staff can change the nation
When we elect a president, we elect with them an entire team that will join them in the West Wing to help run the country. Each of these staffers has a story to tell, and in West Wingers, Barack Obama's White House staff reveals how these extraordinary citizens shape the presidency and the nation.
In these moving and revealing personal stories, eighteen Obama staffers bring us deep inside the presidency, offering intimate accounts of how they made it to the White House, what they witnessed, and what they accomplished there. In each one we see the human face of government, staffers devoting themselves to the issues that have defined their lives. We hear from a married gay staffer pushing the president towards marriage equality; a senior aide working to implement the Affordable Care Act while battling Stage IV cancer; a hijab-wearing Muslim adviser accompanying the President to a mosque. From the triumphs of Obamacare and marriage equality to the tragedy of the Charleston shooting, this book tells the history of the Obama presidency through the men and women who worked tirelessly to support his vision for America. More than just a history though, West Wingers is an inspiring call to arms for public service, a manifesto for the power of committed public servants to make real change, and a powerful testament to what true diversity, inclusivity, and progress can look like in America.
Audiobook Table of Contents:

Gautam Raghavan served as Barack Obama's liaison to the LGBT community as well as the Asian American and Pacific Islander community from 2011-2014. Prior to this, he worked for the Department of Defense, the 2008 Obama Campaign, and the Democratic...

Gautam Raghavan served as Barack Obama's liaison to the LGBT community as well as the Asian American and Pacific Islander community from 2011-2014. Prior to this, he worked for the Department of Defense, the 2008 Obama Campaign, and the Democratic...

West Wingers
Copy and paste the code into your website.
New here? Learn how to read digital books for free