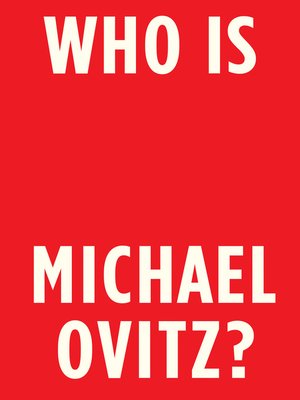 Who Is Michael Ovitz?

Biography & AutobiographyBusinessPerforming ArtsNonfiction
If you're going to read one book about Hollywood, this is the one.

As the co-founder of Creative Artists Agency, Michael Ovitz earned a reputation for ruthless negotiation, brilliant strategy, and fierce loyalty to his clients. He reinvented the role of the agent and helped shape the careers of hundreds of A-list entertainers, directors, and writers, including Steven Spielberg, Martin Scorsese, Meryl Streep, Sean Connery, Bill Murray, Robin Williams, and David Letterman.

But this personal history is much more than a fascinating account of celebrity friendships and bare-knuckled dealmaking. It's also an underdog's story: How did a middle-class kid from Encino work his way into the William Morris mailroom, and eventually become the most powerful person in Hollywood? How did an agent (even a superagent) also become a power in producing, advertising, mergers & acquisitions, and modern art? And what were the personal consequences of all those deals?

After decades of near-silence in the face of controversy, Ovitz is finally telling his whole story, with remarkable candor and insight.
Biography & AutobiographyBusinessPerforming ArtsNonfiction

Who Is Michael Ovitz?
Copy and paste the code into your website.
New here? Learn how to read digital books for free