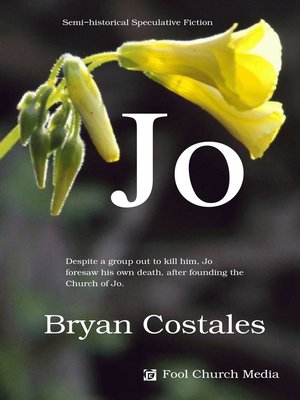 Jo Bailey was a mystic and religious figure who, shortly before his death, founded the Church of Jo. Jo is a late 20th Century historical novel by award winning author Bryan Costales. The life and times of Jo Bailey is presented in the form of a sequence of letters, articles, news accounts, diaries, and so on, each told by someone who cared about, or hated, Jo. It is the combined nature of these narratives that provide a rich overview of the last part of the 20th Century and and of Jo Bailey's ability to foresee death, but never prevent it.

This book is a fiction in the guise of reality, a story about the last half of the 20th century, and about three solved mysteries.