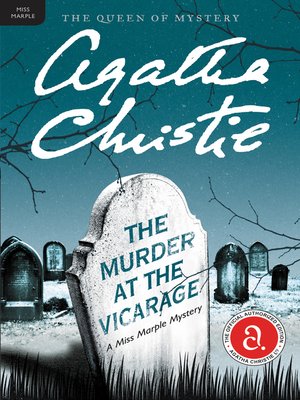 The Murder at the Vicarage

The Murder at the Vicarage is Agatha Christie's first mystery to feature the beloved investigator Miss Marple—as a dead body in a clergyman's study proves to the indomitable sleuth that no place, holy or otherwise, is a sanctuary from homicide.

Miss Marple encounters a compelling murder mystery in the sleepy little village of St. Mary Mead, where under the seemingly peaceful exterior of an English country village lurks intrigue, guilt, deception and death.
Colonel Protheroe, local magistrate and overbearing land-owner is the most detested man in the village. Everyone—even in the vicar—wishes he were dead. And very soon he is—shot in the head in the vicar's own study. Faced with a surfeit of suspects, only the inscrutable Miss Marple can unravel the tangled web of clues that will lead to the unmasking of the killer.

Agatha Christie is the most widely published author of all time, outsold only by the Bible and Shakespeare. Her books have sold more than a billion copies in English and another billion in a hundred foreign languages. She died in 1976.

More about Agatha Christie
The Murder at the Vicarage
Copy and paste the code into your website.
New here? Learn how to read digital books for free