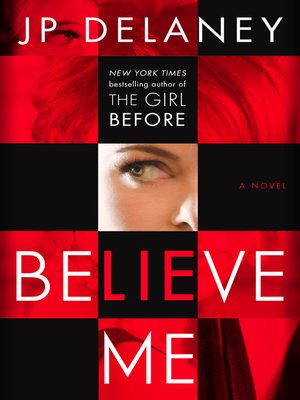 FictionLiteratureSuspenseThriller
In this twisty psychological serial killer thriller from the New York Times bestselling author of The Girl Before, an actress plays both sides of a murder investigation.
One out-of-work British actress pays the rent on her New York City apartment the only way she can: as a decoy for a detective agency, hired to entrap straying husbands. When the cops begin investigating one of her targets for murdering his wife—and potentially others—they ask her to lure the suspect into a confession.
But with the actress pretending to be someone she isn't, differentiating the decoy from the prey becomes impossible—and deadly.
FictionLiteratureSuspenseThriller

JP DELANEY is a pseudonym for a writer who has previously written bestselling fiction under other names. Delaney is the author of the New York Times bestseller The Girl Before.

More about JP Delaney
Believe Me
Copy and paste the code into your website.
New here? Learn how to read digital books for free