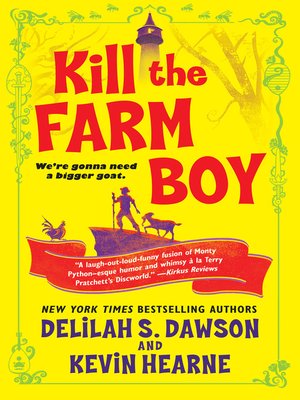 The Tales of Pell

FantasyFictionMythologyHumor (Fiction)
In an irreverent new series in the tradition of Monty Python, the bestselling authors of the Iron Druid Chronicles and Star Wars: Phasma reinvent fantasy, fairy tales, and floridly written feast scenes.
"Ranks among the best of Christopher Moore and Terry Pratchett."—Chuck Wendig
"When you put two authors of this high caliber together, expect fireworks. Or at least laughs. What a hoot!"—Terry Brooks
Once upon a time, in a faraway kingdom, a hero, the Chosen One, was born . . . and so begins every fairy tale ever told.
This is not that fairy tale.
There is a Chosen One, but he is unlike any One who has ever been Chosened.
And there is a faraway kingdom, but you have never been to a magical world quite like the land of Pell.
There, a plucky farm boy will find more than he's bargained for on his quest to awaken the sleeping princess in her cursed tower. First there's the Dark Lord, who wishes for the boy's untimely death . . . and also very fine cheese. Then there's a bard without a song in her heart but with a very adorable and fuzzy tail, an assassin who fears not the night but is terrified of chickens, and a mighty fighter more frightened of her sword than of her chain-mail bikini. This journey will lead to sinister umlauts, a trash-talking goat, the Dread Necromancer Steve, and a strange and wondrous journey to the most peculiar "happily ever after" that ever once-upon-a-timed.

Praise for Kill the Farm Boy
"A rollicking fantasy adventure that upends numerous genre tropes in audacious style . . . a laugh-out-loud-funny fusion of Monty Python–esque humor and whimsy à la Terry Pratchett's Discworld."—Kirkus Reviews
"Dawson and Hearne's reimagining of a traditional fairy tale is reminiscent of William Goldman's The Princess Bride and William Steig's Shrek! Irreverent, funny, and full of entertaining wordplay, this will keep readers guessing until the end."—Library Journal
"Will have you laughing out loud until strangers begin to look at you oddly."—SyFy
"A smart comedy . . . nuanced, complicated, and human."—Tordotcom
"[Delilah Dawson and Kevin Hearne] make fun of the typical 'white male power fantasies,' and in that, they succeed, with their heroes all characters of color and/or falling somewhere under the LGBTQ umbrella."—Publishers Weekly
FantasyFictionMythologyHumor (Fiction)

Kevin Hearne hugs trees, pets doggies, and rocks out to heavy metal. He also thinks tacos are a pretty nifty idea. He is the author of A Plague of Giants and the New York Times bestselling series The Iron Druid Chronicles. Delilah S. Dawson is the...

More about Kevin Hearne
Kill the Farm Boy
Copy and paste the code into your website.
New here? Learn how to read digital books for free