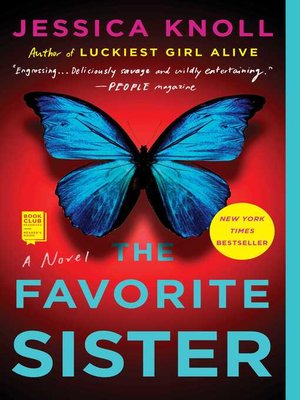 "Engrossing...Deliciously savage and wildly entertaining."—People Magazine (Book of the Week)

NO ONE EVER SUSPECTS THE GOOD ONE.
Brett and Kelly have always toed the line between supportive sisters and bitter rivals. Growing up, Brett was the problem child, in the shadow of the brilliant and beautiful Kelly. In adulthood, all that has changed. Kelly is a struggling single mother and Brett has skyrocketed to such meteoric success, which has been chronicled on a reality TV show called Goal Diggers.

When Kelly manipulates herself onto the show and into Brett's world, Brett is right to be threatened. Kelly, and only Kelly, knows her younger sister's appalling secret, and it could ruin her.

Still, when the truth comes out in the explosive final weekend of filming, neither of them ever expected that the season would end in murder
FictionLiteratureSuspenseThriller

Jessica Knoll is the New York Times bestselling author of Luckiest Girl Alive, which has been optioned for film by Lionsgate with Reese Witherspoon set to produce. She has been a senior editor at Cosmopolitan and the articles editor at Self. She g...

More about Jessica Knoll
The Favorite Sister
Copy and paste the code into your website.
New here? Learn how to read digital books for free