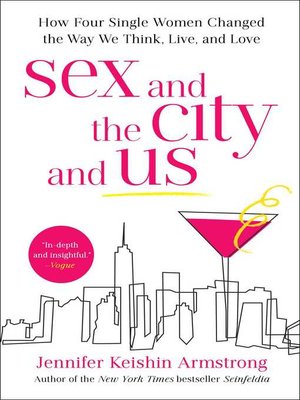 Sex and the City and Us

How Four Single Women Changed the Way We Think, Live, and Love

ArtBiography & AutobiographyNonfictionEntertainment
The bestselling author of Seinfeldia offers a fascinating retrospective of the iconic and award-winning television series, Sex and the City, in a "bubbly, yet fierce cultural dissection of the groundbreaking show" (Chicago Tribune).
This is the story of how a columnist, two gay men, and a writers' room full of women used their own poignant, hilarious, and humiliating stories to launch a cultural phenomenon. They endured shock, slut-shaming, and a slew of nasty reviews on their way to eventual—if still often begrudging—respect. The show wasn't perfect, but it revolutionized television for women.

When Candace Bushnell began writing for the New York Observer, she didn't think anyone beyond the Upper East Side would care about her adventures among the Hamptons-hopping media elite. But her struggles with singlehood struck a chord. Beverly Hills, 90210 creator Darren Star brought her vision to an even wider audience when he adapted the column for HBO. Carrie, Miranda, Charlotte, and Samantha launched a barrage of trends, forever branded the actresses that took on the roles, redefined women's relationship to sex and elevated the perception of singlehood.

Featuring exclusive new interviews with the cast and writers, including star Sarah Jessica Parker, creator Darren Star, executive producer Michael Patrick King, and author Candace Bushnell, "Jennifer Keishin Armstrong brings readers inside the writers' room and into the scribes' lives...The writing is fizzy and funny, but she still manages an in-depth look at a show that's been analyzed for decades, giving readers a retrospective as enjoyable as a $20 pink cocktail" (The Washington Post). Sex and the City and Us is both a critical and nostalgic behind-the-scenes look at a television series that changed the way women see themselves.
ArtBiography & AutobiographyNonfictionEntertainment

Jennifer Keishin Armstrong is the author of Sex and the City and Us, Seinfeldia, and Mary and Lou and Rhoda and Ted. She writes about pop culture for several publications, including The New York Times Book Review, Fast Company, Vulture, BBC Cultur...

More about Jennifer Keishin Armstrong
Sex and the City and Us
Copy and paste the code into your website.
New here? Learn how to read digital books for free