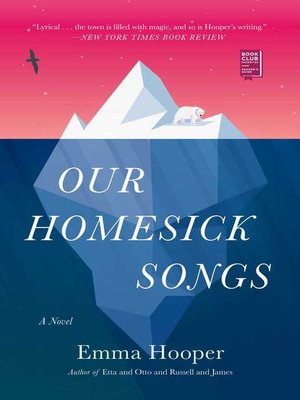 FictionLiterature
**LONGLISTED FOR THE GILLER PRIZE**

From Emma Hooper, critically acclaimed author of Etta and Otto and Russell and James, a People magazine "Pick of the Week," comes a lyrical, charming, and mystical story of a family on the edge of extinction, and the different way each of them fights to keep hope, memory, and love alive.
The Connor family is one of the few that is still left in their idyllic fishing village, Big Running; after the fish mysteriously disappeared, most families had no choice but to relocate and find work elsewhere. Aidan and Martha Connor now spend alternate months of the year working at an energy site up north to support their children, Cora and Finn. But soon the family fears they'll have to leave Big Running for good. And as the months go on, plagued by romantic temptations new and old, the emotional distance between the once blissful Aidan and Martha only widens.

Between his accordion lessons and reading up on Big Running's local flora and fauna, eleven-year-old Finn Connor develops an obsession with solving the mystery of the missing fish. Aided by his reclusive music instructor Mrs. Callaghan, Finn thinks he may have discovered a way to find the fish, and in turn, save the only home he's ever known. While Finn schemes, his sister Cora spends her days decorating the abandoned houses in Big Running with global flair—the baker's home becomes Italy; the mailman's, Britain. But it's clear she's desperate for a bigger life beyond the shores of her small town. As the streets of Big Running continue to empty Cora takes matters—and her family's shared destinies—into her own hands.

In Our Homesick Songs, Emma Hooper paints a gorgeous portrait of the Connor family, brilliantly weaving together four different stories and two generations of Connors, full of wonder and hope. Told in Hooper's signature ethereal style, each page of this incandescent novel glows with mythical, musical wonder.
FictionLiterature

Raised in Alberta, Canada, Emma Hooper brought her love of music and literature to the UK, where she received a doctorate in Musico-Literary studies at the University of East-Anglia and currently lectures at Bath Spa University. A musician, Emma p...

More about Emma Hooper
Our Homesick Songs
Copy and paste the code into your website.
New here? Learn how to read digital books for free