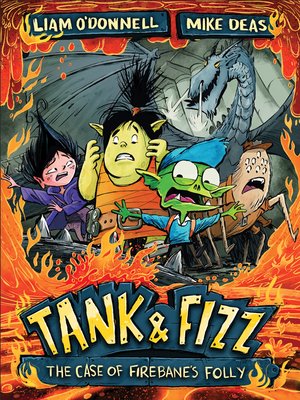 The Case of Firebane's Folly

Comic and Graphic BooksJuvenile FictionJuvenile LiteratureMystery
When their school bus veers off course while taking the kids from Gravelmuck Elementary on a field trip, monster detectives Tank and Fizz witness a crime that brings them snout to snout with Rockfall Mountain's oldest monster, the ancient dragon Firebane Drakeclaw. Thieves have stolen the Crown of Peace, which keeps the monster clans of the Dark Depths from fighting, and Tank and Fizz saw the whole thing. Now the detectives must track down the thieves and find the crown or their whole class will become dinner for one very hungry dragon! The Case of Firebane's Folly is the fourth book in the Tank & Fizz series about two crime-solving monsters living under a mountain, following The Case of the Slime Stampede, The Case of the Battling Bots and The Case of the Missing Mage.
Comic and Graphic BooksJuvenile FictionJuvenile LiteratureMystery

Liam O'Donnell is an author and educator who has created over forty books and graphic novels for young readers, including the Max Finder Mystery, Graphic Guide Adventures, West Meadows Detectives series. He was born in Northern Ireland and came to...

More about Liam O'Donnell
The Case of Firebane's Folly
Copy and paste the code into your website.
New here? Learn how to read digital books for free