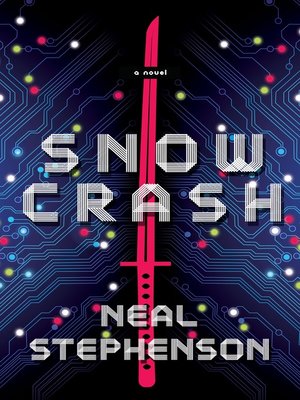 FictionScience Fiction
One of Time's 100 best English-language novels • A mind-altering romp through a future America so bizarre, so outrageous—you'll recognize it immediately
Only once in a great while does a writer come along who defies comparison—a writer so original he redefines the way we look at the world. Neal Stephenson is such a writer and Snow Crash is such a novel, weaving virtual reality, Sumerian myth, and just about everything in between with a cool, hip cybersensibility to bring us the gigathriller of the information age.

In reality, Hiro Protagonist delivers pizza for Uncle Enzo's CosoNostra Pizza Inc., but in the Metaverse he's a warrior prince. Plunging headlong into the enigma of a new computer virus that's striking down hackers everywhere, he races along the neon-lit streets on a search-and-destroy mission for the shadowy virtual villain threatening to bring about infocalypse.
Praise for Snow Crash
"[Snow Crash is] a cross between Neuromancer and Thomas Pynchon's Vineland. This is no mere hyperbole."—The San Francisco Bay Guardian
"Fast-forward free-style mall mythology for the twenty-first century."—William Gibson
"Brilliantly realized . . . Stephenson turns out to be an engaging guide to an onrushing tomorrow."—The New York Times Book Review
FictionScience Fiction

Neal Stephenson issues from a clan of rootless, itinerant hardscience and engineering professors (mostly Pac-10, Big 10, and Big 8 with the occasional wild strain of Ivy). He began his higher education as a physics major, then switched to geograph...

More about Neal Stephenson
Snow Crash
Copy and paste the code into your website.
New here? Learn how to read digital books for free