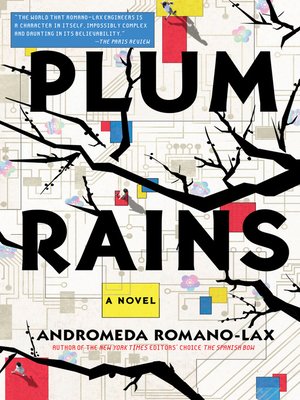 View more libraries...
In a tour-de-force tapestry of science fiction and historical fiction, Andromeda Romano-Lax presents a story set in Japan and Taiwan that spans a century of empire, conquest, progress, and destruction.

2029: In Japan, a historically mono-cultural nation, childbirth rates are at an all-time low and the elderly are living increasingly longer lives. This population crisis has precipitated the mass immigration of foreign medical workers from all over Asia, as well as the development of finely tuned artificial intelligence to step in where humans fall short.
In Tokyo, Angelica Navarro, a Filipina nurse who has been in Japan for the last five years, works as caretaker for Sayoko Itou, a moody, secretive woman about to turn 100 years old. One day, Sayoko receives a present: a cutting-edge robot “friend” that will teach itself to anticipate Sayoko’s every need. Angelica wonders if she is about to be forced out of her much-needed job by an inanimate object—one with a preternatural ability to uncover the most deeply buried secrets of the humans around it. Meanwhile, Sayoko becomes attached to the machine. The old woman has been hiding secrets of her own for almost a century—and she’s too old to want to keep them anymore.

What she reveals is a hundred-year saga of forbidden love, hidden identities, and the horrific legacy of WWII and Japanese colonialism—a confession that will tear apart her own life and Angelica’s. Is the helper robot the worst thing that could have happened to the two women—or is it forcing the changes they both desperately needed?