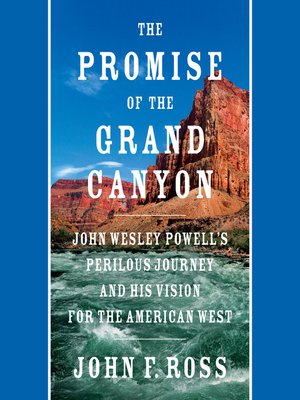 The Promise of the Grand Canyon

"A bold study of an eco-visionary at a watershed moment in US history."—Nature
A timely, thrilling account of the explorer who dared to lead the first successful expedition down the Colorado through the Grand Canyon—and waged a bitterly-contested campaign for sustainability in the West.
John Wesley Powell's first descent of the Colorado River through the Grand Canyon in 1869 counts among the most dramatic chapters in American exploration history. When the Canyon spit out the surviving members of the expedition—starving, battered, and nearly naked—they had accomplished what others thought impossible and finished the exploration of continental America that Lewis and Clark had begun almost 70 years before.
With The Promise of the Grand Canyon, John F. Ross tells how that perilous expedition launched the one-armed Civil War hero on the path to becoming the nation's foremost proponent of environmental sustainability and a powerful, if controversial, visionary for the development of the American West. So much of what he preached—most broadly about land and water stewardship—remains prophetically to the point today.
HistoryNatureNonfiction

JOHN ROSS is a former editor of American Heritage and an adventure writer with extensive whitewater experience. His previous books are Enduring Courage: Ace Pilot Eddie Rickenbacker and the Dawn of the Age of Speed and War on the Run: The Epic Sto...

More about John F. Ross
The Promise of the Grand Canyon
Copy and paste the code into your website.
New here? Learn how to read digital books for free