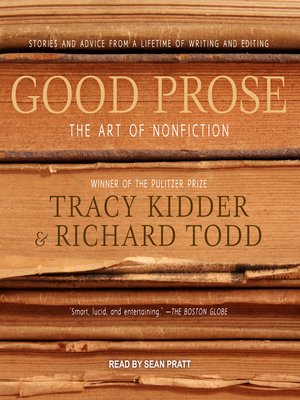 The Art of Nonfiction

WritingLanguage ArtsNonfiction
Good Prose is an inspiring book about writing-about the creation of good prose-and the record of a warm and productive literary friendship. The story begins in 1973, in the offices of the Atlantic Monthly, in Boston, where a young freelance writer named Tracy Kidder came looking for an assignment. Richard Todd was the editor who encouraged him, and from that article grew a lifelong association. Before long, Kidder's The Soul of a New Machine, the first book the two worked on together, had won the Pulitzer Prize. Good Prose explores three major nonfiction forms: narratives, essays, and memoirs. Kidder and Todd draw candidly, sometimes comically, on their own experience-their mistakes as well as accomplishments-to demonstrate the pragmatic ways in which creative problems get solved. They also turn to the works of a wide range of writers, novelists as well as nonfiction writers, for models and instruction. They talk about narrative strategies, about the ethical challenges of nonfiction, and about the realities of making a living as a writer. They offer some tart and emphatic opinions on the current state of language. And they take a clear stand against playing loose with the facts. Their advice is always grounded in the practical world of writing and publishing.
WritingLanguage ArtsNonfiction

Tracy Kidder graduated from Harvard and studied at the University of Iowa. He has won the Pulitzer Prize, the National Book Award, the Robert F. Kennedy Book Award, and many other literary prizes. The author of Strength in What Remains, My Detachm...

Richard Todd was educated at Amherst and Stanford. He has spent many years as a magazine and book editor, and has written articles on a wide range of cultural themes for Harper's, the Atlantic Monthly, the New York Times Magazine, Conde Nast Trave...

More about Richard Todd
Good Prose
Copy and paste the code into your website.
New here? Learn how to read digital books for free