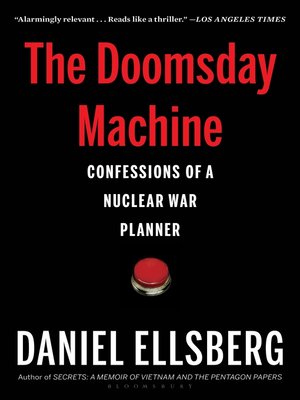 
From the legendary whistle-blower who revealed the Pentagon Papers, an eyewitness expos é of the dangers of America's Top Secret, seventy-year-long nuclear policy that continues to this day.

Here, for the first time, former high-level defense analyst Daniel Ellsberg reveals his shocking firsthand account of America's nuclear program in the 1960s. From the remotest air bases in the Pacific Command, where he discovered that the authority to initiate use of nuclear weapons was widely delegated, to the secret plans for general nuclear war under Eisenhower, which, if executed, would cause the near-extinction of humanity, Ellsberg shows that the legacy of this most dangerous arms buildup in the history of civilization—and its proposed renewal under the Trump administration—threatens our very survival. No other insider with high-level access has written so candidly of the nuclear strategy of the late Eisenhower and early Kennedy years, and nothing has fundamentally changed since that era.

Framed as a memoir—a chronicle of madness in which Ellsberg acknowledges participating—this gripping exposé reads like a thriller and offers feasible steps we can take to dismantle the existing "doomsday machine" and avoid nuclear catastrophe, returning Ellsberg to his role as whistle-blower. The Doomsday Machine is thus a real-life Dr. Strangelove story and an ultimately hopeful—and powerfully important—book about not just our country, but the future of the world.