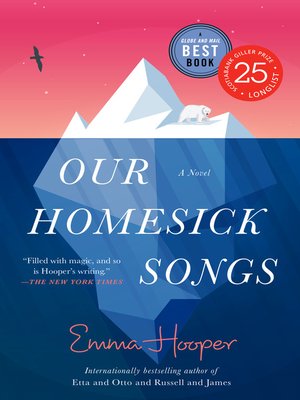 From Emma Hooper, acclaimed author of Etta and Otto and Russell and James, a People magazine “Pick of the Week,” comes a “haunting fable about the transformative power of hope” (Booklist, starred review) in a charming and mystical story of a family on the edge of extinction.

Newfoundland, 1992. When all the fish vanish from the waters and the cod industry abruptly collapses, it's not long before the people begin to disappear from the town of Big Running as well. As residents are forced to leave the island in search of work, ten-year-old Finn Connor suddenly finds himself living in a ghost town. There's no school, no friends, and whole rows of houses stand abandoned. And then Finn's parents announce that they too must separate if their family is to survive.
But Finn still has his sister, Cora, with whom he counts the dwindling boats on the coast at night, and Mrs. Callaghan, who teaches him the strange and ancient melodies of their native Ireland. That is until his sister disappears, and Finn must find a way of calling home the family and the life he has lost.