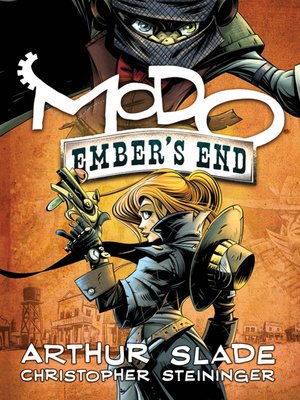 Comic and Graphic BooksJuvenile FictionScience FictionHistorical Fiction
Modo, who first made his appearance in The Hunchback Assignments, is a young, disfigured spy trained to be the ultimate secret agent. Not only is Modo brilliant and strong, but he also has a special ability: he can temporarily take on the appearance of other people. While on holiday, Modo and fellow spy Octavia Milkweed find themselves in Ember's End. Created by the slightly mad scientific genius Dr. Ebenezer Ember, this is no ordinary wild-west town. It is surrounded by an energy field that prevents gunpowder from firing, and messages are sent via pneumatic tubes. There are also rumors that before Dr. Ember died, he built a weapon so powerful it could end all wars. With the local sheriff recently deceased, the two travelers are suddenly put in charge of Ember's End law enforcement.
Comic and Graphic BooksJuvenile FictionScience FictionHistorical Fiction

Arthur Slade is a Governor General's Award-winning author of many novels for young readers, including the Amber Fang series and Modo: Ember's End, a graphic novel based on the characters from The Hunchback Assignments trilogy. Raised on a ranch in...

More about Arthur Slade
Modo
Copy and paste the code into your website.
New here? Learn how to read digital books for free