To Believe in Women

ebook ∣ What Lesbians Have Done For America--A History 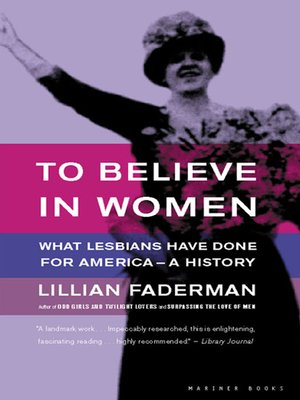 A unique and "often quite moving" look at gay women's role in US history (The Washington Post).
In this "essential and impassioned addition to American history," the three-time Lambda Literary Award winner and author of Odd Girls and Twilight Lovers focuses on a select group of late-nineteenth- and early-twentieth-century lesbians who were in the forefront of the battle to procure the rights and privileges that large numbers of Americans enjoy today (Kirkus Reviews).

Hoping to "set the record straight (or, in this case, unstraight)" for all Americans and provide a "usable past" for lesbians in particular, Lillian Faderman persuasively argues that the sexual orientation of her subjects may in fact have facilitated their accomplishments. With impeccably drawn portraits of such seminal figures as Susan B. Anthony, Carrie Chapman Catt, and Eleanor Roosevelt, To Believe in Women "will raise eyebrows and consciousness" (Dianne Wood Middlebrook). As Faderman writes in her introduction, "This is a book about how millions of American women became what they are now: full citizens, educated, and capable of earning a decent living for themselves."

A landmark work of impeccable research and compelling readability, To Believe in Women is an enlightening and surprising read.

"For those who need a dose of pride and a slice of history, Faderman's portraits should strike a popular note. 'To Believe in Women' is a decent starting point for learning about these pioneers and their contributions to American life." —The New York Times