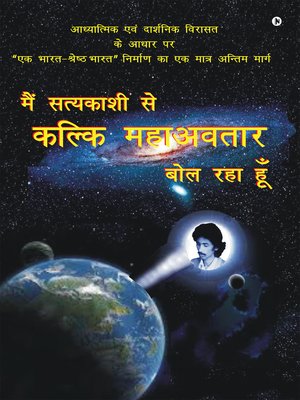 The Vishwshastra: The knowledge of the final knowledge, including the world religion, secular religion karmaveda: the first, final and fifth veda and World Standard (WS) of mind series by Lava Kush Singh "Vishwmanav" for the realization and uplifting of Kaliyug to Swarnyug. Like the uplifting of Tretayug to Dwaparyug Ramayan by Valmiki was to enlighten the human society, uplifting of Dwaparyug to Kaliyug Mahabharat by Maharshi Vyas was to enlighten the human society.You may easily call Vishwshastra literature by other names like Dharm or Satya or Final or Rashtriya Dharma Shastra or Secular National Religion. It say's all noble work and noble thoughts come to us from every side.The book Main Satyakashi se Kalki Mahavatar Bol Raha Hun is a summarized part of the book Vishwshastra: the knowledge of final knowledge for centralization-realization of civilian and governing mind. This book is the first and final blue print of Rashtra Nirman i.e. Build India based on spiritual and philosophical heritage truth. In other words, building "One India – Super India", "One world – Super World" and "New India – New World".