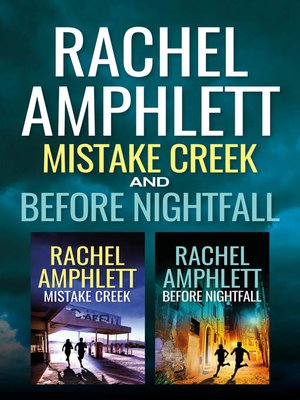 Two action-packed mysteries full of suspense that will have you on the edge of your seat!

"An action-packed thriller that barrels along at an astonishing pace, and one that will keep you guessing until the very end!" Goodreads

If they move you, they will kill you.

When Kate Foster secures a lucrative new job, her boss insists that she undertake a pre-deployment security and hostage survival course – a course that's not meant to be easy, and one that Kate almost fails, to the consternation of her instructor.

Kidnapped and held hostage by a group of violent criminals, Kate must recall the lessons she learned during her security training in order to stay alive while she hopes for rescue.

For Finn Scott, the man who trained her, it's his worst nightmare. Haunted by memories of a failed hostage rescue, he is thrust into a situation beyond his control.

Now, against a sinister adversary whose ambitions will tear apart Eastern Europe, Finn must face the demons from his past to secure Kate's future before the kidnappers' deadline expires...

Praise for Before Nightfall:

'I thought this might be a lovey dovey womans book. It was anything but and a great adventure read. The characters were alive and the story moved from page to page at a frantic pace...and the twist in the tail was totally unexpected!' ~ Goodreads

'Character development was terrific, I really felt as if I knew these people. Tense, excitement, drama, bit of a love interest - this book really did have it all. And the ending? What can I say? I NEVER saw that coming ... phew!' ~ Goodreads

'As soon as you start reading you know this is going to be a very fast paced book, it was a very easy read with a good storyline which had a twist near the end which I wasn't expecting at all!' ~ Goodreads

''This book was highly addictive. A thrilling suspense/mystery novel that you'll not want to put down until you reach the end.' ~ Goodreads

Nina O'Brien's life changes forever when a stranger appears at the door to her father's truck stop, bloodied and incoherent.

As night falls and a ferocious storm descends on the tiny Californian community, the small group of people sheltering with Nina steel themselves to face the onslaught, only to be confronted by a ruthless killer.

With nowhere to run, and no means to raise the alarm, Nina must decide who to trust if she is to survive the night.

'Read book on holiday finished reading at 3.30 am - could not sleep and had to see what happens next. When reading these books I can see the movie in my head - the writer paints the picture for me as I read. Hope there are more to come really enjoyable read!' ~ Goodreads

'This story gets to you right from the start.... action packed and never a dull moment...thoroughly enjoyed the antic of the two main characters.' ~ Goodreads