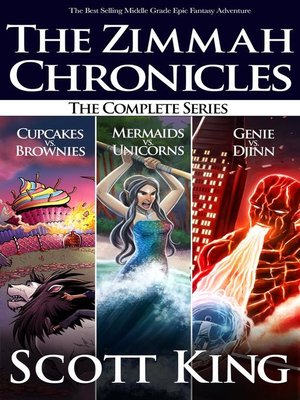 Get the complete 3-book set for one low price as well as an EXCLUSIVE BONUS STORY!

What if your wishes went wrong?

Karim and Whitney were normal kids until they met Zimmah, a wicked djinn with a twisted sense of humor.

Whether they’re caught in a candypunk war between the Cupcake and Brownie Kingdoms, an epic battle between Unicorns and Mermaids, or a surprise invasion of San Francisco, the action never stops and the stakes couldn’t be higher.

Can Karim and Whitney survive jello buildings, butterfly-spewing volcanoes, and dozens of evil djinns to save the world?

Can they save their own parents?

This is the collection readers have been wishing for! All three books of the Zimmah Chronicles trilogy, together at last, plus the never-before-released bonus tale, Dinosaurs vs. Robots.

This omnibus is sure to be treasured by readers of all ages, whether they're experiencing Karim and Whitney’s amazing adventures for the first time or are faithful fans eager to devour the saga all over again.