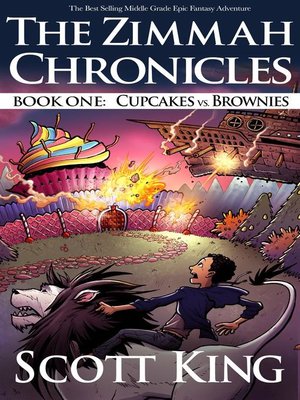 A World Where Everything Is Made Of Desserts!

When ten-year-old Karim Jacobs makes a wish to save his parents' marriage, Zimmah, a wicked djinn, decides it’s a boring wish and uses his chaotic magic to change the world into one where everything is made of desserts.

Caught in a candypunk world, Karim must face fantastical creatures like gummy-grizzly-bears and rock candy beasts while at the same time trying to stop the Cupcake Kingdom and Brownie Kingdom from going to war. With his parents' lives in danger, its up to Karim to stop Zimmah and restore the world to normal.

If you like epic coming-of-age adventure stories that teach important life lessons in the wackiest, most delightful of ways, then you’ll love every page of Scott King’s Cupcakes vs. Brownies.