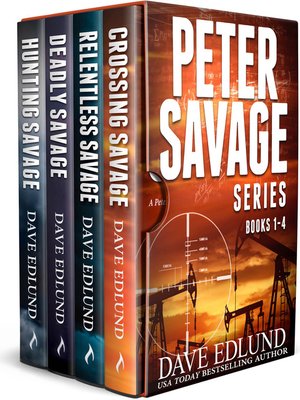 View more libraries...
The Peter Savage novels have been lauded for their "crackling action" (Kirkus Reviews), and come "highly recommended to fans of thrillers" (Foreword Reviews). The New York Times and #1 international bestselling author Steve Berry praises Peter Savage as "a hero full of grit and determination" and calls the series "required reading for any thriller aficionado."
The Peter Savage series by bestselling, award-winning author Dave Edlund has taken readers around the world on a deadly race to energy independence, dropped them in a battle to end a genocide, made them stare down a threat of bioterrorism, and unearthed an unthinkable act of treason threatening to redraw the map of the Middle East. Now, read Books 1-4 in a convenient anthology before Guarding Savage debuts on April 24, 2018.
CROSSING SAVAGE
In this edge-of-your-seat thriller, author Dave Edlund brings readers face to face with the promise of energy independence... and its true cost.
"This book is fast-paced and lively, reminiscent of a Tom Clancy thriller." - The US Review of Books
RELENTLESS SAVAGE
In this fast-paced, action-driven adventure Peter Savage confronts a hidden genocide, genetic manipulation, and a tipping point in the balance of world power.
"Not since Crichton's Jurassic Park have I read such an engaging mix of genetic misdeed and thrilling action." - Gary W. Stout, author of Serial Samaritan
DEADLY SAVAGE
From the award-winning Peter Savage novels comes a tale of political intrigue, biological warfare, and the fragile balance of world power.
"Dave Edlund's Deadly Savage is an enthralling story from its thoughtful beginning through to its multiple climactic moments and gripping plot twists." - Foreward Reviews
HUNTING SAVAGE
When an unthinkable act of treason and a clandestine pact threaten to redraw the map of the Middle East, Peter Savage becomes both hunter and prey.
"Dave Edlund delivers another knockout punch...fast-paced action, political intrigue, ruthless adversaries...and a heroic Peter Savage." - Linda Berry, author of Pretty Corpse