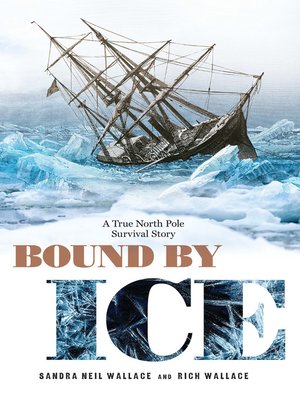 This thrilling and terrifying true story of the 1879 search for the North Pole follows the frightening fates of the USS Jeannette crew as disaster strikes — and the men battle to survive two years bound by ice.
In the years following the Civil War, "Arctic fever" gripped the American public, fueled by myths of a fertile, tropical sea at the top of the world. Bound by Ice follows the journey of George Washington De Long and the crew of the USS Jeannette, who departed San Francisco in the summer of 1879 hoping to find a route to the North Pole. However, in mid-September the ship became locked in ice north of Siberia and drifted for nearly two years before it was crushed by ice and sank. De Long and his men escaped the ship and began a treacherous journey in extreme polar conditions in an attempt to reach civilization. Many—including De Long—did not survive.
This true story for middle graders keeps readers on the edge of their seats to the very end. Includes excerpts from De Long’s extensive journals, which were recovered with his body; newspapers from the time; and photos and sketches by the men on the expedition.