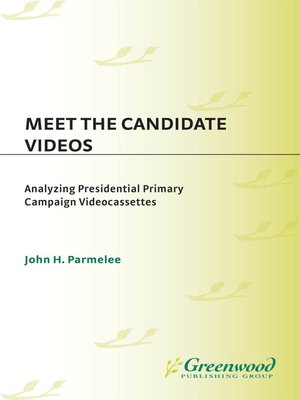 Parmelee shows how presidential primary campaign videocassettes serve many functions for candidates on their road to the White House. These videocassettes, which include images and issues often based on polling data and focus groups, are sent out before the primaries to battleground states to establish an initial image of the candidate.

A variety of methods are used to explore the videocassettes of the Democratic and Republican presidential candidates—Gary Bauer, Bill Bradley, George W. Bush, Steve Forbes, Al Gore, and John McCain—who released presidential primary meet the candidate videos during the 2000 race. Frame analysis, quantitative content analysis, and in-depth interviews with the producers of these videos were employed to provide answers to Parmelee's main research question: What function do candidate videos serve in presidential primary campaigns? Findings indicate that these videos, which can run from 5 to 20 minutes in length, serve a clear educational function to explain the candidates' stand on key policy issues. The videos—which are mailed to voters, journalists, and potential doners, and shown to Democratic and GOP faithful at party functions—also serve as fundraisers, surrogate speakers, and inoculators. But, while the videos share some common functions, each campaign targets its video to a slightly different audience based on the campaign's overall strategy. Of particular interest to scholars, students, and other researchers involved with American presidential politics and political communications.