ebook ∣ The American Name That Became a Legend 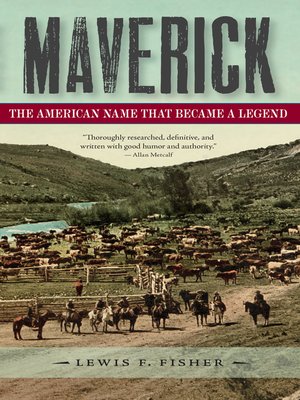 View more libraries...
By definition, a maverick is a "lone dissenter" who "takes an independent stand apart from his or her associates" or "a person pursuing rebellious, even potentially disruptive policies or ideas." The word maverick has evolved in the English language from being the term for an unbranded stray calf to a label given to a nontraditional person to a more extreme "uncontrollable individualist, iconoclast, unstable nonconformist." The word has grown into an adjective ("he made a maverick decision") and become a verb (mavericking or mavericked). Of all the words that originated in the Old West and survive to the present day, author Lewis Fisher notes, maverick has been called the least understood and most corrupted. But where did the word come from?
The word's definition is still such a mystery that Merriam-Webster lists it in the top 10 percent of its most-looked-up words. All of the origin stories agree it had something to do with Samuel A. Maverick and his cattle, but from there things go amok rather quickly. Was Sam Maverick a cattle thief? A legendary nonconformist who broke the code of the West by refusing to brand his calves? A Texas rancher who believed branding cattle was cruelty to animals? A runaway from South Carolina who branded all the wild cattle he could find and ended up with more cattle than anyone else in Texas?
Samuel A. Maverick was a notable landholder and public figure in his own time, but his latter-day fame is based on the legend that he was a cattle rancher. No amount of truth-telling about maverick seems to have slowed the tall tales surrounding the word's origination. Maverick: The American Name That Became a Legend is a whodunit, a historical telling of the man who unwittingly inspired the term, the family it's derived from, the cowboys who embraced it as an adjective meaning rakish and independent, the curious inquirers intrigued by its narrative, and the appropriators who have borrowed it for political fame.
Texas historian (and secondhand Maverick by marriage) Lewis Fisher has combed through Maverick family papers along with cultural memorabilia and university collections to get at the heart of the truth behind the far-flung Maverick legends. Maverick follows the history of the word through the "Maverick gene" all the way to Hollywood and uncovers the mysteries that shadow one of our country's iconic words. Taken as a whole, the book is a fascinating portrayal of how we form, use, and change our language in the course of everyday life, and of the Maverick family's ongoing relationship to its own contributions, all seen through the lens of a story featuring cowboys, Texas Longhorns, rustlers, promoters, movie stars, athletes, novelists, lawyers, mayors, congressmen, and senators—to say nothing of named maverick brands ranging from Ford cars and air-to-ground missiles to computer operating systems, Vermont maple syrup, and Australian wines.
Ironically, given its literal meaning as unbranded, maverick is a brand name that helped shape the history of the American West and represents the ideal of being true to oneself.