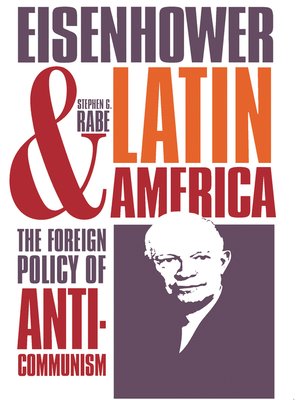 View more libraries...
Stephen Rabe's timely book examines President Dwight D. Eisenhower's Latin American policy and assesses the president's actions in light of recent "Eisenhower revisionism."
During his first term, Eisenhower paid little attention to Latin America but his objective there was clear: to prevent communism from gaining a foothold. The Eisenhower administration was prepared to cooperate with authoritarian military regimes, but not to fund developmental aid or vigorously promote political democracy. Two events in the second administration convinced Eisenhower that he had underestimated the extent of popular unrest—and thus the potential for Communist inroads: the stoning of Vice-President Richard M. Nixon in Caracas and the radicalization of the Cuban Revolution. He then began to support trade agreements, soft loans, and more strident measures that led to CIA involvement in the Bay of Pigs invasion and plots to assassinate Fidel Castro and Rafael Trujillo. In portraying Eisenhower as a virulent anti-Communist and cold warrior, Rabe challenges the Eisenhower revisionists who view the president as a model of diplomatic restraint.